When planning a trip to India we find is too big and transports too slow to visit it in less than a month.
Many people use to ask me for advice: what to see and where to go?.
Imagine I am going to plan a trip including US, Canada and Mexico for a month... No way! you use to say.
Same thing for India (if not so big, slow transport make it similar).

My advice for you depends on what are you looking for.
If you are looking to see the cities, festivals, and traditions from all documentaries on Tv, just keep on north India, I list you the places from most popular on documentaries to less:
Varanasi (Benares), Agra (Taj Mahal), Jaipur, Rajasthan State, Delhi, Rishikesh, McLeod Ganj...

I recomend South for the people who wants beaches, who wants Spiritual retreats and advanced Yoga (Sivananda head quarters near Kerala capital, Mysore Asthanga Yoga expensive courses, ...) or the travellers who already visited India at least once and wants to keep travelling to discover new places.

Except Goa Beaches, Hampi, famous Ashrams (Osho, Sai Baba, Mother Hugs, Auroville) and Karnataka and Kerala beaches and Mumbai you will hardly find crowds of travellers. Most of the time you will find very few and most of them are not so friendly as in north. Many are joining some kind of spiritual or yoga course or retreat.

It is not the best choice for lonely travellers rather than a small group.

Tamil Nadu means: Huge old temples (the Cathedrals of India: Madurai, Rameswaran, Thanjavur, Trichy, Vellore, Tirunamalai, Kanchimpuram, Mahabalipuram, Tirupati mas al norte,...), tradition, old, misterious and dark Hindu religion, rural poor and honest people, landscapes and nature in the Nilguiris (Kodaikanal waterfalls, Conoor tea plantations), Spiritual and sandy Beaches in Auroville (beaches are much better on West side in Kerala).
Travellers use to stuck in Mahabalipuram and Auroville.
It is one of the most corrupted States in India, so 99% of what you see is poor, dirty and unfair. Diseases spreads easily. Buses are crap and fun, roads are..., hospitals and public services (except National train service) are sadly the worst. Avoid the capital Madras (Chenai), apart f the exotic name has nothing at all.
Time to visit: Best on european winter time (October, Nov, Dec, Jan, Feb). Rest of the year can be too hot or sofocating. 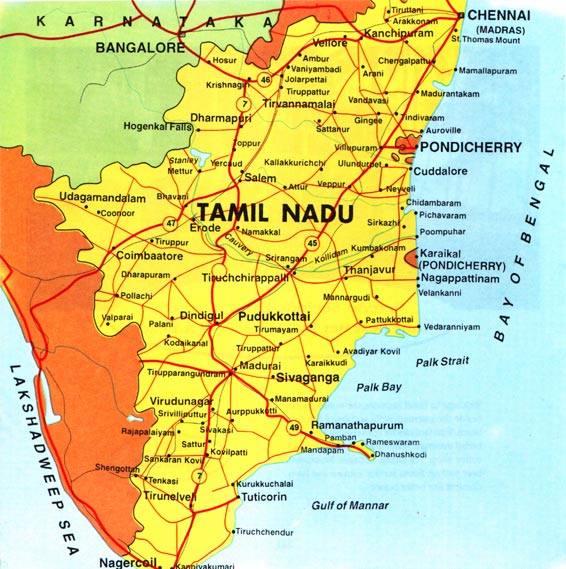 I sadly didn´t have the pleasure of visiting Varkala and Kovalam beaches, 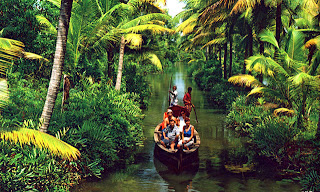 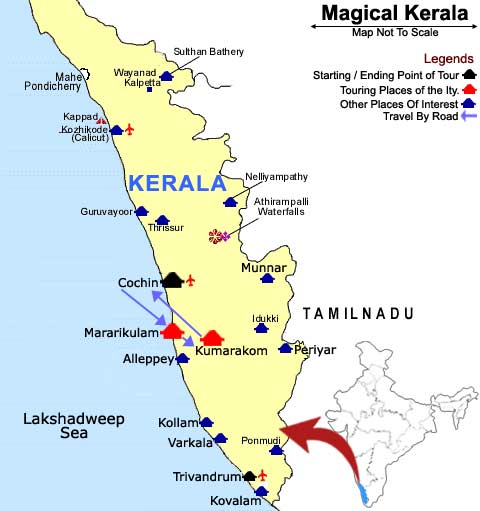 Karanataka means: Rural lovely world, a pearl for real travellers to discover new
Few beaches are interesting travellers spot.
Hampi ruins are the second travellers place, a huge stone hilly area with traditional life.
Halebid-Belur-Hassan are interesting old ruins (I prefer Hassan hilltop with the huge statue of Shravanabelagola or Gomateshwara neither of the names are easy to pronunce)
Jog falls not easy to arrive, a hundred meters high (amazing in monzon times)
Mysore Yoga: expensive courses for Asthanga Yoga, the hardest and fastest Yoga style. Visiting the Palace is interesting, but not tooo much to do apart of it.
Bangalore, the capital, is the worlds famous software headquarters (IBM, Sun microsistems, Microsoft). Salaries here are imposible in the rest of India, so a real middle class is growing up. City itself has not heritage to offer and modernity is spreading. 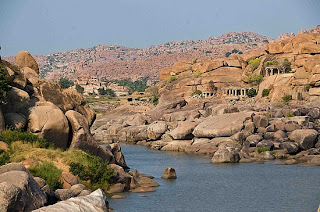 Andra Pradesh means: Maybe the less interesting state of the south. It is a poor industrial state.
Tirupati hindu yearlymillionspilgrimage center is maybe the highest attraction to have a shocking experience, Sai Baba Ashram for the ones looking for miracles, RDT spanish Ngo at Annantapur for spanish helpers, the capital Hyderabath (I didn´t visit this city). 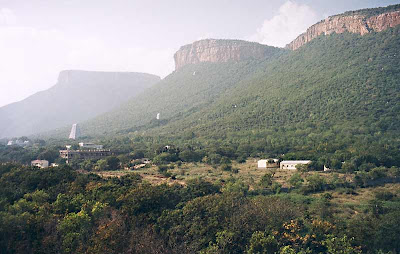 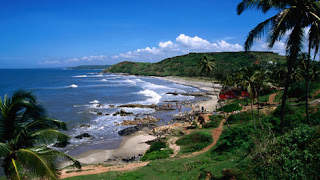 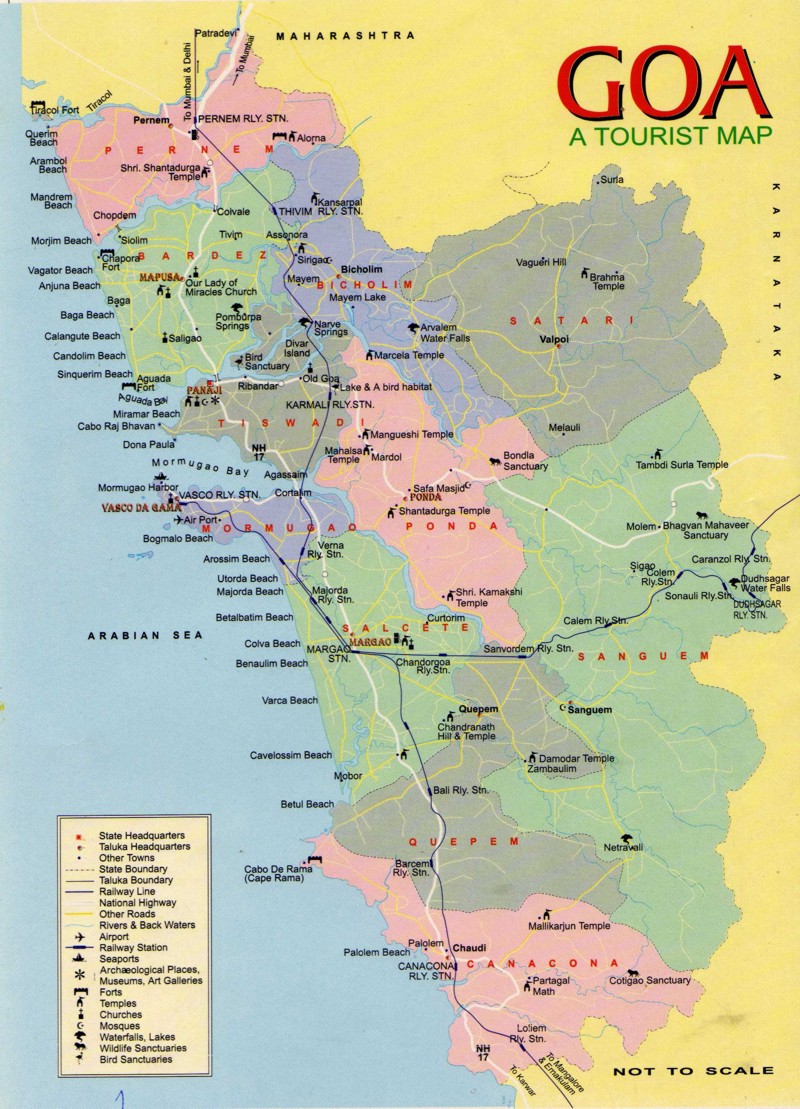 Andaman Islands means: Tropical Beaches without resorts, jungle, negritoes (means in portuguese "small black people" given to the natural inhabitants of the islands, they are actually big, strong and super skilly),  snorkle, adventure, fish, poisoning snakes, sunflies (scrached turns into pseudomons infections can only be treated by antibiotic pomades), malaria (highest rate of Travelers infected all over India).
From Port Blair I only recomend the fried fish.
There is very few islands where travellers go (there is not to much accomodations), and most of the islands remains pure and unhabited. 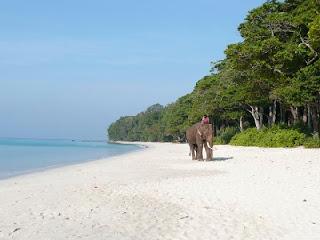 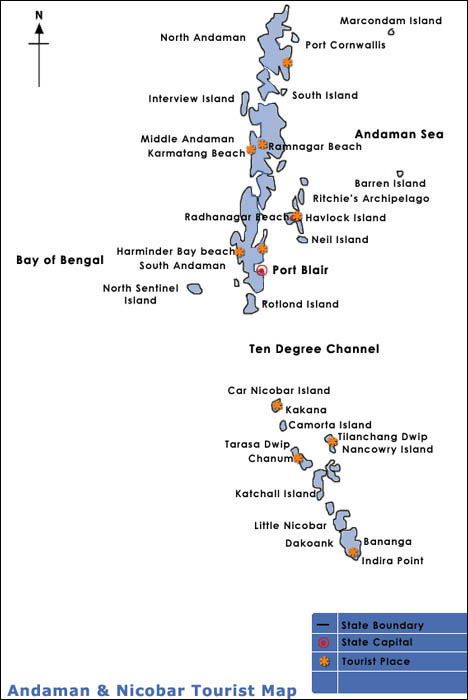